Michael Fuller’s (Grant’s son) 450 Desmo Corsa has finally seen the light of day after a hibernation of approximately 18 years, and those members who attended the Ducati Owners Club of Victoria track day at Winton were the first to see and hear the 450 once again where it belongs, out on the race track.
The machine was originally owned by Aksel Martinsen and started life as a Silver ?Shotgun?. The bike was raced for a number of years by Anders Mykldvelt, during a period of high enthusiasm for these machines, when names such as Forcycle, Saftune, Gowanloch and Formula European Series graced race programs. In late 1987 Aksel began preparing the 450 for the Easter Bathurst races in 1988, to be raced by Don Bramich alongside his own 450 sporting a modified Pantah cylinder head. It was in 1987 that I began my association with the 450, as I was asked by Aksel to assist with the preparation and machining of many components for the machines ?88 Easter outing.
Back in 1987-88, many hours of preparation were put into the machine, with the current fairing and tank being fitted in place of the original tank and no fairing. Converting the ball headstem bearings to a much improved taper roller setup, fitting larger valves, making a floating rear brake and manufacturing and machining many improved items to make this a highly competitive 450 DUCATI. Bathurst was a weekend with mixed success, but as always the lessons learnt made the machine better again.

About 5 years ago Aksel mentioned in conversation that he was thinking of selling the 450, having been involved in its creation all those years ago, and keen to have another DUCATI in our collection, a deal was struck and the restoration job slowly began to get this unusual machine back to its former glory. At first the intention was to restore the 450 to how it was when it raced at Bathurst, but along the restoration pathway we were extremely fortunate that Ian Gowanloch showed a huge interest in the work and enthusiasm that both Michael and Nicholas (another son) had for DUCATI?s and were putting into the 450. Ian was the source for many of the exotic parts that now grace the 450, and have turned what was going to be a fairly straight forward restoration into a project that has produced a machine of quality and preparation equal to anything produced by restorers/racers worldwide. With its red/white colour scheme, Oldani front brake, Grimeca rear brake, Ceriani front forks and Marzocchi shocks it has very much ended up as a Spaggiari replica, they being the same parts he had on his factory racing 450.
Only 3 days prior to the Winton track day, the 450 was fired up for the first time and run for approximately 10 minutes to check for oil leaks and any other obvious signs of problems. As most of the major components were new to the machine we had no information on the correct setup, so with the forks preload, oil weight and quantity had to estimated, as did gearing, shock settings, carburettor jetting as well as the positioning of all of the hand and foot controls.

The Winton track day was very successful day for Michael and the 450, he completed 6 sessions with no problems other than a fairing screw and clutch pivot screw vibrating out, and a new NGK Irridium spark plug deciding to foul in the pits. On his 7th session on the track I was following Michael when the 450 decided to wildly blow smoke out of the exhaust, as the engine was still running I thought at first that a broken oil ring was the probable cause of the smoke. Fortunately no oil was being deposited on the track and after having continued to complete about half a lap Michael noticed that his bike was causing all of this smoke. Pulling in the clutch and killing the ignition he safely pulled off the circuit, but by this time the engine had lost 2/3 of its oil. Once back at the pits a quick look at the engine revealed that the inlet valve was sitting neatly on top of the piston, and that all of the shims and half rings were sitting in a neat row inside the cambox. An initial inspection by eye with a torch looked like things may not be too serious.Having had a great day and very happy how the machine had run during its first outing in many years, we packed our gear and both bikes away. Once back at the motel in Benalla we where keen to take a closer look at the engine, so within about 10 minutes work the cylinder head was off and confirmed that there was no serious damage to any of the engine components. The diagnosis was that the inlet valve guide had pulled through into the combustion chamber, causing the initial oil plume. The inlet valve touched the head of the piston once and was pushed back up into the spark plug once. A new oversize valve guide with a shoulder has already been machined up in aluminium bronze and a 750F1 valve modified to be the new inlet valve. At the same time a few other components are being changed, improved or modified. All part of the development of a machine like this.
Technical aspects of the 450 factory race replicaBrakes: Oldani Magnesium front. Grimeca rear with floating back plate.?Suspension: Front forks Ceriani GP Marzocchi shocks.?Tyres: Dunlop GP900.?Clutch: NCR dry clutch with sintered bronze friction plates. Straight cut primary gears.?Ignition: Dyna pickup with twin output coil firing twin spark plugs powered by total loss battery.?Carburation: 42.5mm Malossi.?Engine: 86.6mm bore with AssoWerke high compression piston (11.7 to 1), 41mm inlet valve, 37.5mm exhaust valve, factory racing camshaft (grey/white), factory pattern reverse cone megaphone.?Tank and fairing: NCR copy

Item out of stock? Cant find what you’re looking for?

We get many more parts in than what we list.

Send us an email with the part number you are looking for to info@beltandbevel.com.au

We’ll do our best to let you know price and availability. 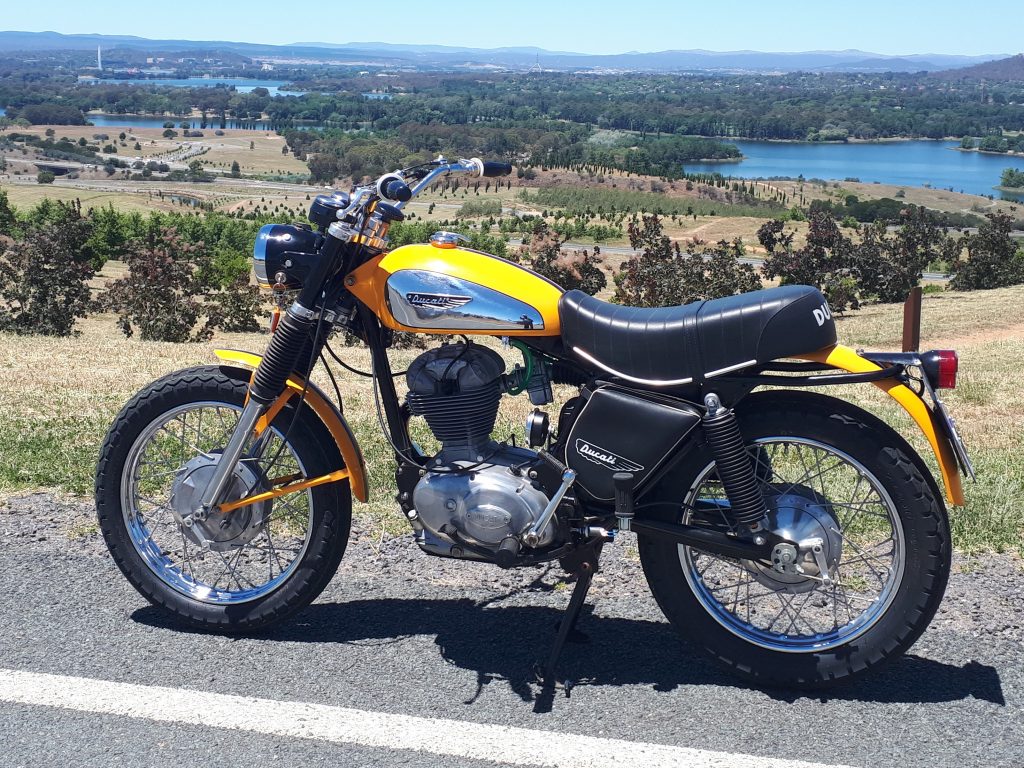